Watch Crunchyroll Outside the US

We’re thrilled to announce that support for Crunchyroll support is finally here. We started rolling out support for this much requested service a few days ago but we didn’t want to tempt fate and announce it until everything was in the bag.

Using Crunchyroll from outside the US gives you a reduced catalogue of manga, anime and drama cartoons – but playmoTV customers are able to enjoy the bigger US version of Crunchyroll.

Crunchyroll is an American service, focusing on East Asian media including manga, anime, drama and much more. Most of the content is available for free even though Crunchyroll offers a Premium membership which offers some great features like increased video quality, a larger lineup of shows and earlier availability for current shows (1 hour after they are aired in Japan)

For those of you are wondering what anime is, the direct translation would just be “Japanese cartoons.” Unlike US or European cartoons which are largely targeted at children, anime appeals to younger audiences with light (G-rated) content and to adults with more complicated, mature content. 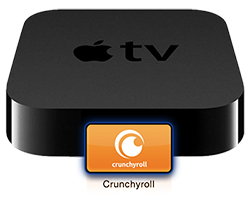 Now also on Apple TV
Apple just pushed released a software update for its little black box, introducing a couple of new native Apple TV applications, one of which is your friendly neighbour Crunchyroll, much to the delight of anime fans in the US (and to anime fans and playmoTV users all around the world). We’ve made sure it’s supported but we do ask that you bear with us as it was announced yesterday.

Therefore, Apple TV support is still experimental, simply because there hasn’t been time to perform our usual tests that are quite extensive, to ensure that you guys don’t encounter any problems when using the service.