Not at all. “Recently Watched” and “My List” don’t not appear the first time you switch Netflix countries is because both are limited to your current location, the reason being that some movies or TV shows are only available in certain countries.

However, with active usage you can have those things in each region.

Traveling with Netflix. What’s this? 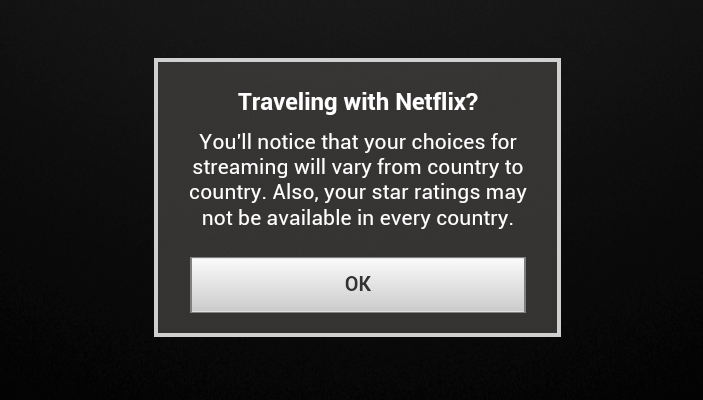 This friendly message appears the first time you switch countries, just to remind you that you are visiting Netflix from outside the country you were located in when you signed up for the service.

How do I benefit from using the Netflix Switcher?

At time of writing Netflix USA currently has 8982 movies and shows, whereas Netflix UK has 3376 movies and shows. Some of the titles overlap, but most don’t, so with our Netflix Switcher you have access to tens of thousands of titles on Netflix.

That’s right, tens of thousands! How do you like them apples?

How can I tell what Netflix country I’m in?

By checking the Netflix Switcher in your playmoTV dashboard. If you need some reassurances you can go through the Netflix catalog. Most Netflix countries have a special category for local movies (except US which has a Foreign category).

How can I put the Netflix Switcher to good use?

Let’s say that you’d like to watch Heat, with Robert DeNiro and Al Pacino. Then we recommend using a site called MoreFlicks, which includes a powerful search engine, and includes various Netflix regions, many of which are in our Netflix Switcher.

As seen in the video above, and the image below, Heat is available in many Netflix regions, including Germany, France and Sweden (which are in the Netflix Switcher). 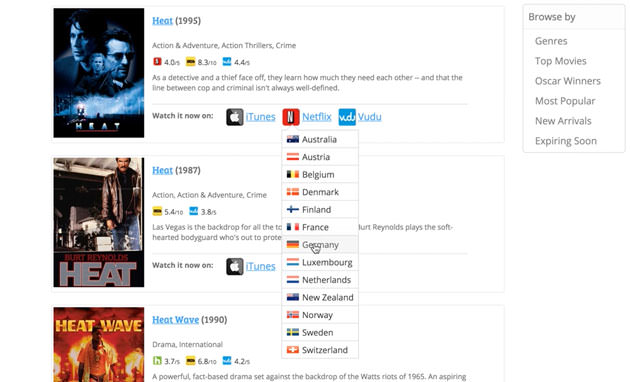 So the next time someone around you is raving about a movie, visit MoreFlicks.com and see if it’s available in any of the Netflix regions currently supported by the Netflix Switcher :)

Here’s a list of some popular TV shows not in Netflix USA, but are available to watch in selected regions, all of which are part of our Netflix Switcher.